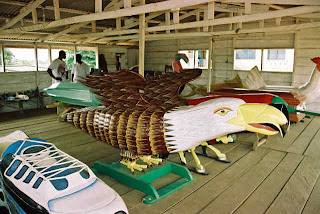 For most tribal cultures in Ghana, especially the Ga people from around Accra, funerals are not only a time of mourning, but also a time of celebration.  They can last a week with food and music and every relative and friend in attendance.  The people believe that their departed loved one is moving to another life, and they make sure they do it in style.

In the 1960’s a creative carpenter named Seth Kane Kwei started making custom designed fantasy coffins which were called Abebuu adekai (” boxes with proverbs “) by Ga people. The concept became very popular and the construction of these coffins is still carried on today by relatives and former apprentices of Kwei in a number of wood shops scattered around southern Ghana.  The coffins are designed to represent an important aspect of the deceased person’s life.  It may be a taxi cab, if the person was a driver; or a fish if the person was a fisherman.  It may be symbolize the person’s hobby, pet or even a vice like a bottle of beer or a cigarette.

The coffins are custom-made and can take up to three weeks to complete.  During that time the deceased person is kept in a refrigerated morgue.  Most coffins are usually made from a light, inexpensive wood such as wawa or alstonia boonei (cheese wood). 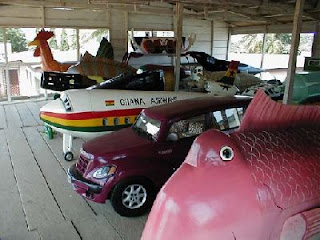 These special coffins are works of art, built by skilled carpenters; designed and finished by talented wood artists. Unlike many works of wood art that remain visible for centuries; these wood creations are buried with the deceased, never to be seen again. It is truly art for the moment, transitory art, like Tibetan Buddhist sand paintings. Each coffin is returned to the same earth that nourished the original tree which gave the wood to build the coffin. The cycle is complete.

In the southern region of Ghana, cofins are designed in hilarious shapes of fruits, animals or craft to depict the profession of the dead individual during their lifetime. 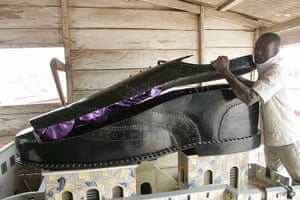 have always been an occasion for both mourning and celebration. In many of the traditional religions, people believed that dead ancestors could powerfully impact the lives of the living, and elaborate funeral ceremonies and celebrations ensured the goodwill of the recently passed. Chiefs and religious leaders merited additional consideration: scholars say that occasionally, chiefs were buried in the carved wooden palanquins upon which they had been carried during their reign. 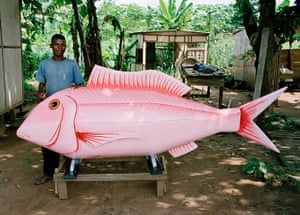 The coffins were traditionally envisioned to represent the lives and livelihoods of those whom they carried to the grave — for example, a fish for a fisherman and a hammer for a carpenter.

RELATIONSHIPS 101: fastest way to move from single to M-A-R-R-I-E-D

How To Get Rid Of Sexually Transmitted Infections (STI) Naturally

HOW TO GET HEALTHY SKIN : TOP TEN TIPS THAT WILL BLOW YOUR MIND AWAY

Top dating tips for women (by a man)

High Blood Pressure May Add Years to Your Brain

In Romantic Relationships,Find Out Who You Are, and Be That in...