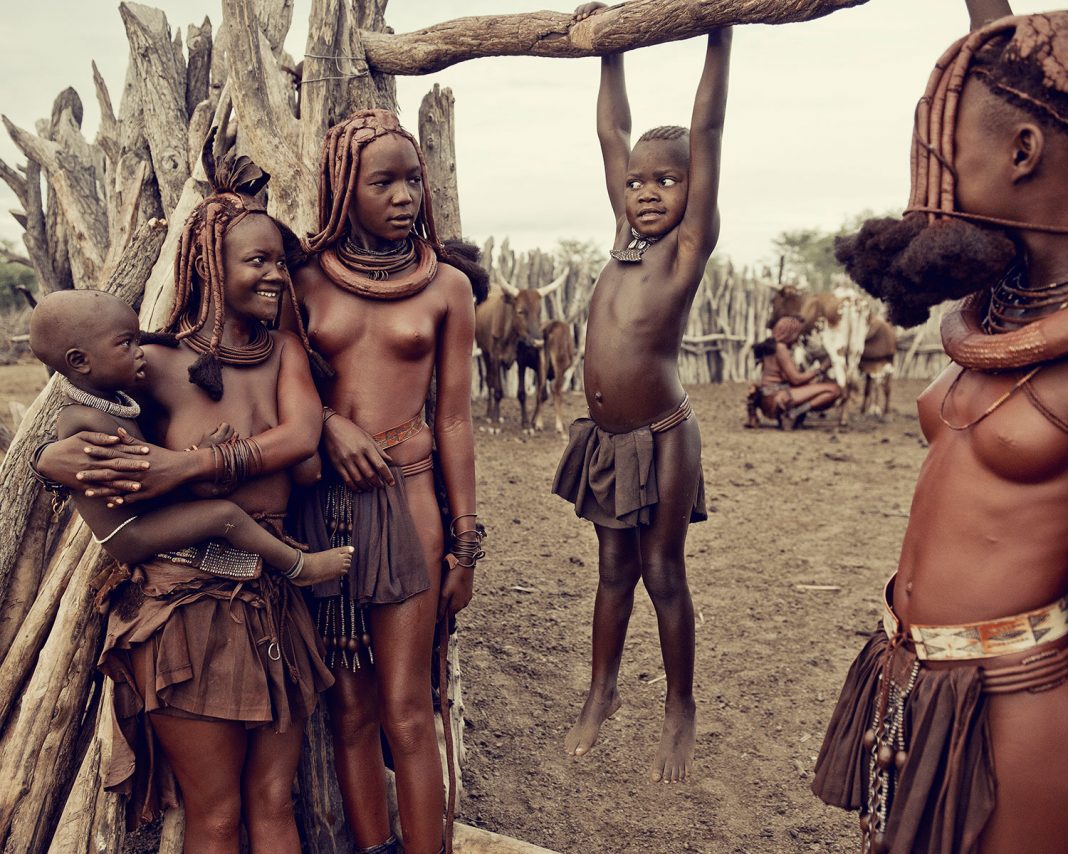 Himba tribe lives in on two sides of the river Kunene – in Angola and in northern Namibia. The region they inhabited for many years is quite remote, partly situated on a plateau, with a hot climate, malaria and other surprises, such as poisonous snakes. Himba population is between 20,000 to 50,000.  The tribe has been living a secluded semi-nomadic pastoral life, keeping their traditions and preserving their culture.

Tourists and photographers are attracted to Himba tribe because of their fashionable attire. Himba women are probably the most fashionable tribeswomen among the tribes of Africa.  They can be easily distinguished by the red skin tone –  women and some men paint themselves head to toe, hair included, with reddish mixture. The mixture is made out of ground red volcanic pumice mixed with butterfat and aromatic resin of omuzumba shrub, called Otjize. Himba believe that this color is beautiful, because it symbolizes the color of earth and blood – the essence of life. Instead of bathing, women reapply the red body paint every morning and evening, using coarse pollen to remove the previous layers of paint. This procedure takes about an hour and a half, and is believed to have a healing effect on the skin, an insect repellent effect, and a way to improve your figure.

Each Himba woman owns two basic household items of the modern civilization – a comb to create elaborate hairstyles, and colorful plastic bags for decorating the hair and other purposes. The hairstyles are achieved by using the red mixture on the braided hair and creating clay dreadlocks, sometimes with puffy ends, adorned with a piece of decoration in the middle of the head. Before reaching puberty, girls have only two braids, and after the puberty they are allowed to have more. Himba men have only one braid backwards from the crown of the head. After marriage, the hair is tied in the shape of a turban.

Himba people do not wear a lot of clothes – instead, they pay a lot of attention to decorating themselves with jewellery. Even newborn babies are adorned with necklaces. Women wear multiple beads, necklaces, bracelets, made out of leather and shells, and beaded anklets to protect themselves from snake bites.

Another interesting fact about Himba tribe is their ritual of fire – the Okoruwo. The fire serves as the medium between the world of living and that of the dead, and it is necessary to keep the fire always burning until the death of the chief. When the chief dies, his house and the fire are destroyed, and the family performs a mourning dance all night long. Before the chief’s burial, they light a mopane tree using the coal from the old chief’s fire.

Himba people are polygamous – an average man usually has two wives. The right of passage before puberty for boys and girls involves circumcision. During the circumcision boys are supposed to be silent and girls are encouraged to scream – it is believed that this act makes them ready for the marriage. Marriages are arranged as soon as a girl is born, and happens when they are 14-17 years old.

Himba always lived in harsh climatic and environmental conditions, being a victims of many droughts, colonial brutality and armed conflicts in Angola. Many times the tribe was on the verge of extinction, however they managed to survive and preserve their culture, traditions and independence.

Some Body Builders Who Took It To The Extreme

Ghana old tradition about the dead

Ever heard of this ‘Most Bizarre Traditions From Around the world.